What a wonderful day.  After weeks of cold wet rainy days the prospect of soggy books at the CBCA (Children’s Book Council of Australia) BBDO (Big Book Day Out) seemed inevitable.  I was invited along to be part of the SCBWI (Society of Children’s Book Writers & Illustrators) table and to give a “Fabulous hands-on demonstration” to promote Engibear’s Bridge.  Under a tent.  In the rain. yay.

And yet…what a day – what a beautiful day.  Sydney really does a great shade of blue in winter and today was no exception (photo by Linnea).

The location, the NSW Writer’s Centre at Callan Park Rozelle, exuded history and stateliness with just a touch of oddness – a good mixture for the event.  CBCA put on a great program, including a story-tent where books were read by their creators and a talk on the lawn running for most of the day – with Jacqueline Harvey, Oliver Phommavanh and many others.  Solveig got to meet some of her favourite authors and I felt 10 years old again sprawled on the grass listening to “troublemaker” Deb Abela unveil her creations and process.   Captivating for old and young alike.  So much was going on outside that I almost entirely missed the talks inside as well as the illustrators’ presentations and craft tables.  Watching Tony Flowers create art from what initially seemed like random scribbles was brilliant.

But then, I was busy myself.  SCBWI put together their own list of events starting with my “workshop”.  Having sneakily secured a table and spread out my Engibear merch across it, I put down my own blanket for a stage and enthralled my audience of (pre-arranged) friends and ring-ins with a book reading of Engibear’s Bridge and a couple of fun exercises (at least…I hope they were fun).  The kids really enjoyed designing their own animal bridge and I think at least a couple of them have already put in their UAC forms to study engineering at University. 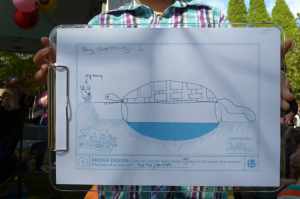 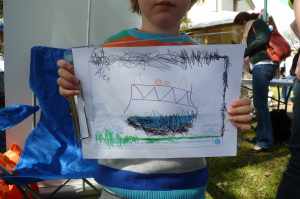 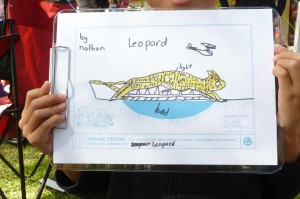 The second exercise was explaining how a Gantt Chart works to children – yes…I said a Gantt chart – using the tasks involved in getting to school in the morning.  It was universally decided that you can’t eat breakfast and wee/poo at the same time so I think they got the idea.

It was great to meet people – both end-users (kids), buyers for end-users (parents) and other people in the industry.  You know, I’ve really only been doing this for a little while but I had some great conversations with other fledgling writers and illustrators where (I hope at least) I could actually be the one doing the encouraging for once rather than the other way around.  Not to mention ending up for a short time at least holding the fort at the SCBWI info table pretending to look like I knew what I was doing, until joined by the wonderful Susanne Gervay.  Mentioning Susanne, at one point in the day I saw Susanne, Sue Whiting (Walker Books) and Libby Gleeson talking together.  If there was anyone out there wanting to kidnap the powerhouse of Australian children’s publishing and hold them to ransom for some nefarious scheme there was your opportunity.  Luckily no-one seems to think the way I do.

Perhaps a little more space to move would have been nice – having competing talks across a small area of lawn was a bit of a challenge.  Next time I’m also hoping some re-consideration is given to the effectiveness of auctioning artworks at the end of a day to an audience of parents struggling with semi-exhausted kids….  Nothing is worse than an auction that falls flat….  But other than that – what a fantastic success for a new event.  Great to meet the fans…I was actually sought-out by some (a first for me….all you famous people would have forgotten what that feels like by now.) 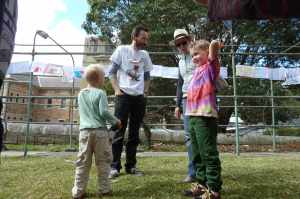 Thanks for smart people, a chance conversation with Amelia from “Better read than dead” (the book supplier for the day) gave me a chance to flog some Engibear’s Dream books.  But we also gave out heaps of brochures for Engibear’s Bridge and I gave away some select advance copies to “Engibear Ambassadors” on the promise they would spread the word, so the marketing machine is starting to roll for that too. 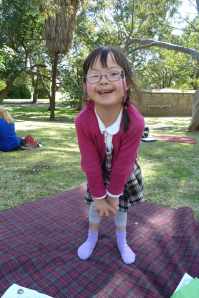 I had a great day, but for me the best part was to see that my girls did too.  Linnea thought it was terrific (there were jelly beans after all – and Grandma and Grandad came too).  It is a lovely feeling knowing your children are behind what you are interested in and to have Solveig say at the end of the day “I love books” was…..well…brilliant.  But she scored a few books and autographs in the process so she would say that anyway!