A very big thank you to my friend Christopher Cheng – who is currently enjoying the pleasures of Hong Kong and Bologna – for asking me to be part of the “Writing Processes Blog Tour”.  Please have a look at Chris’ blog entry as well at http://www.chrischeng.com/2014/03/writing-processes-blog-tour.html

And next week I’m delighted to invite Andrew King (creator of Engibear) and Aleesah Darlinson (of Unicorn Riders fame) to continue the adventure into what, how and why we do what we do.  Please see Bios and links at the bottom.

Firstly, I should be honest and let all of you know I am really much more of an illustrator than an author, although I have written (or am writing) two stories for children – one a children’s picture book and the other a young adult novel.  Neither has been published but I’d certainly like to do that one day.  But for this exercise, specifically about Writing Processes, I thought I’d focus on the children’s picture book I’ve written and intend to illustrate, from the perspective of an author/illustrator.  This story is titled “Solveig’s Shadow”….and if there are any publishers out there, well – make me an offer!  Just click on a pictures to view a close-up. 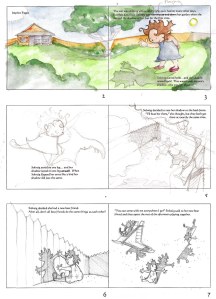 What am I working on?
I really only have capacity in my life (as a full-time architect, forgetful husband, failed handy-man and father of two lovely girls) to work on one project at a time.  At the moment (and most of the time) I am in illustration mode – currently finishing illustrations for the second in the “Engibear” series – “Engibear’s Bridge”, written by Andrew King (see his entry next Monday).
I really love illustrating and while it is a long and arduous journey it is also incredibly rewarding and enjoyable.
However, when I am not on an actual illustration project I rediscover that I have lots of personal projects that I’d like to work on, including (slowly, slowly) “Solveig’s shadow”.  I have completed the story (well..I think so) and have got up to an initial illustrated storyboard, but that is as far as it has gotten.  I have decided for this blog entry to scatter the story throughout the blog, so if you like it, then let me know. 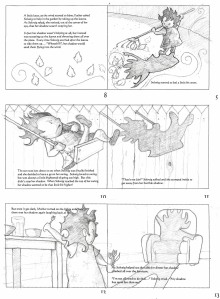 “Solveig’s shadow” as a concept came from watching my daughter (yes…that’s her name) playing in the garden staring at her shadow.  It also picks up on that funny irrational way that young children can develop “issues” with seemingly harmless things.  That scowl they get!  And how many times do we hear young children cry “but it’s not fair!!!”
Other projects include a more lengthy Young Adult novel(a?) loosely based on the issues of Globalisation and 1st world/3rd world problems.  Yes I know – sounds exciting doesn’t it…but there is a twist in the story that I’m really enjoying.  I see it as an more old-fashioned book with black & white plates (remember when books had “plates”?).  It is quite inspired by the fabulous writer/illustrator collaboration of Paul Stuart and Chris Riddell in the “Far flung stories” series, which are favourites of mine.  I won’t tell you more at this stage but I will ask you to consider one important question….do you know who made your shoes?
–
How does my work differ from others of its genre?

For writing: I can’t really tell as yet.  I do know that my ideas are all over the place so surely if that is the case then they must differ at some point.  Also, in terms of writing I tend to read and re-read what I have done to the point that I can’t objectively compare it anymore to other literature.  At that point it is more like a sculpture than a story.  In terms of stories, I tend to hold a lot of ideas in my head – which I know is quite mad and I know I have lost some along the way.  But unlike many actual authors, I guess I do not have an urge to write down what I’m thinking – except in the one case of the YA book I’m working.  For that one, I’m really glad now that I took the time to get the bones down on paper. 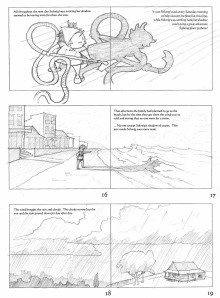 For illustrating: I have two answers to this.  Firstly I see myself as a “Brief-driven” illustrator – and for that reason I have never developed a particular style or look or even a preferred medium.  I like to think I make my style suit the project – for the good of the project.  Unfortunately, it may be a better marketing tool to develop a personal style….but we will see.  It may come.
The second answer is what I do know that comes more naturally and is (at least for Engibear) developing itself into a style is the merging of my architectural background and illustration in producing quite technical, tight and detailed drawings.  This then becomes the bane of my existence….but in the long run I have received a lot of favourable feedback from kids saying how much they get into the detail.
–
Why do I write what I do?

I would love – one day – to regularly write and illustrate my own books.  But why?  Self-indulgance?  Self-importance?  Partly.  But I also love that I have reconnected with what I loved as a child.  I always loved picture books and story books as a kid (Where would my world be today without “Where the Wild Things Are”?).  One of my favourites was Rudyard Kiplings “Just-so stories”.  They transported me to another world, another time.  I then “grew-up” and went and did all the grown-up adult stuff.  But then I had children and I was right back there again.  And I want to stay this time (although unfortunately I still have to squeeze into the spaces left by the grown up part of my life).
–
How does my writing process work?
Ok…with a back-catalogue of exactly two stories, my writing “process” may be a bit limited.
For “Solveig’s shadow” I knew the basic concept and I knew the basic ending.  Is it trite to say everyone loves a happy ending or is it simply a reality (I do know of a few children’s books that don’t have happy endings…but it is only a few).  So I knew I wanted my main character to resolve her internal conflicts. 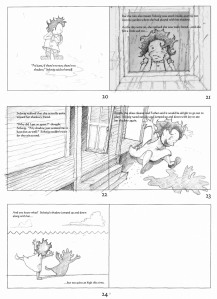 For the parts in between, I have to admit it was much more a visual choice.  I had to find activities where it could be construed that Solveig’s shadow was having more fun than she was.  Vacuuming becomes wrestling a python and a failed trip to the beach with a low setting sun means that even if you don’t go for a swim it isn’t going to stop your shadow from racing into the surf.  So yes…a lot of the time when I’m thinking about stories it is generated from the pictures in my mind, the pictures that I think could make a good story (I have abandoned plenty of ideas because while it has some good visuals it hasn’t made it to a good story.
–
Side thought:
Pixar taught me that.  When Monsters Inc came out I remember reading an article where John Lasseter said that despite the fact that the technology could now do so much (and to be honest Pixar were always surprising us with what they could technically achieve) they would never produce a film unless it was first anchored by a great story.  And I believe that is exactly what they have done (except for Cars 2…that was a rubbish story and clearly just produced for the marketing mula).
–
But having said all that about visuals coming first, the other story I am working on was initially based on a simple idea.  This idea has grown and grown, gnawing away at me in the background until I had to start sculpting it.  The idea itself wasn’t the story, it was a frustration that we do not share with children what is really going on in the world.  I have a dislike of living in a throw-away society…especially when what we throw away was made in some horrific factory in a third-world country for two cents.  How is it we can go to Target and buy $10 jeans?  $10 is nothing to us….but think about how little the person who made it got paid?  Ooh…getting a bit heavy now.
All-in-all, my “writing process” is unfortunately hampered by being relegated to the hobby-of-a-hobby (i.e. I work as an architect, do illustration as a hobby and write as a hobby-of-a-hobby).  That’s not because I think it deserves that relegation….just the natural result of only being able to set aside a limited amount of time to do what I love (and trying to get to bed before 1am).
And my Illustration process?….well that is another story.  If you are interested have a look at my blog entry on the “anatomy of an illustration”.  https://unfolddesign.wordpress.com/2013/11/23/anatomy-of-an-illustration/
I hope this has been enjoyable as well as mildly distracting (it was certainly distracting to write….I should really be drawing instead – I have a deadline to meet).
Please come back and see me again…I’ll be around.
benjamin johnston
http://www.unfolddesign.com.au
And next week – please have a good peruse of these two talented and enthusiastic authors – Andrew King and Aleesah Darlinson:
—–
Dr Andrew King has qualifications in Chemical Engineering and Environmental Engineering and he is passionate about the integral role of engineering in environmental management and sustainability.
Andrew really enjoys his family life and dreaming; Engibear was created while playing with his children in the backyard sandpit and they encouraged him to write a book. In his spare time Andrew likes to play guitar and tinker in his workshop. Andrew’s family are avid readers and have really helped him to appreciate the magic of books.
https://www.facebook.com/pages/Engibear/455837167790548
http://www.engibear.com
—–

Aleesah Darlison writes picture books and novels for boys and girls of all ages.

When Aleesah’s not writing entertaining and inspiring stories for children, she’s usually looking after her three energetic offspring and her frisky fox terrier, Floyd.